How healthy are sports drinks and how do they work?

I am on a Paleo diet and thus not a fan of sugar-loaded beverages, such as sports drinks. But I also exercise regularly, and during intense exercise, the body needs more than just water. That leads to the following questions: How healthy are sports drinks and how do they work? In this article, I will take a closer look at what happens in your body during exercise and the chemistry of sports drinks. I will also introduce you to Paleo-friendly alternatives from LIFEAID, a beverage company that’s popular in the CrossFit community.

THE CHEMISTRY DURING EXERCISE:

Before we answer the question of how healthy sports drinks are, let’s take a look at what happens in your body during exercise.

Aerobic exercise includes jogging, swimming, biking, etc. During such exercise, the human body uses glucose and oxygen to produce adenosine triphosphate (ATP), water and carbon dioxide. The chemical formula for that is:

ATP is an energy carrier, and it is a crucial component to getting the energy to where your body needs it. Glucose is nothing more than sugar, and your liver produces it by processing the sugar and carbohydrates you eat and drink. Your body stores glucose as glycogen in your muscles and liver.

An anaerobic exercise is usually a form of high-intensity exercise that leads to the production of lactic acid. That happens when your body cannot get oxygen to your cells fast enough to trigger the process mentioned above. In such cases, your body just uses glucose and breaks it up into ATP and lactic acid. The chemical formula for that is:

GLUCOSE IS YOU BODY'S FUEL

As you can see, for both aerobic and anaerobic exercise your body needs glucose (sugar) to produce energy. So it makes sense for sports drinks to contain sugar, doesn’t it?

When your body heats up during exercise, it produces sweat to cool it back down. As part of that process, it excretes electrolytes (salts) in the form of sodium and potassium. That’s why your sweat tastes salty, and sports drinks contain those salts.

THE INGREDIENTS OF TRADITIONAL SPORTS DRINKS

Many sports drinks, such as Gatorade or Powerade contain the following key ingredients:

DO YOU NEED A SPORTS DRINK?

As I have mentioned above, your liver produces glucose from the carbohydrates you eat. That’s a continuous process. As a result, and during light exercise, your body has access to enough glucose through its filled glycogen reserves.

However, high-intensity exercise can easily deplete those glycogen reserves, and you need to replenish them to maintain your performance.

Whether or not you need a sports drink during exercise depends on the type and intensity of the exercise. If you go for a low-intensity, 20-minute jog, you won’t deplete your glycogen and electrolyte reserves. So you don’t need the 21 grams of added sugar a traditional sports drink has. In such as case, water with a pinch of salt, if you prefer, does the trick.

Ketogenesis is the biochemical process by which organisms produce a group of substances collectively known as ketone bodies by the breakdown of fatty acids and ketogenic amino acids.
By the way, if your liver doesn’t have access to carbohydrates, it can produce energy from fat in the form of ketones. That process is called ketogenesis, and it is the base of the Keto diet.

HOW HEALTHLY ARE SPORTS DRINKS?

Beyond the artificial colors and flavors of traditional sports drinks, their Achilles heel is their main ingredient: added sugar. There is nothing wrong with giving your body the glucose it requires to function during intense exercise. In other words, in cases when your body would deplete its glycogen reserves if you didn’t replenish them. But giving sugar to a body that doesn’t need it, due to full glycogen reserves, is like ingesting poison. The same is true with excess electrolytes, especially sodium.

Sports drinks and Paleo usually don’t go together because the Paleo diet doesn’t include sugar-loaded drinks. Unless, they are made using Paleo-compatible sweeteners, such as stevia extract or blue agave nectar.

At LIFEAID, we fuel your passion with our clean & refreshing nutritional blends. Can you say the same about those other one-dimensional products whose “blend” is a bunch of additives, sugar, & added caffeine? Our products are tailored for your active lifestyle – without all the junk. Join us as we show the world there is a better way.
Stevia, for example, has zero calories and a Glycemic Index (GI) of 0. That means it does not raise your blood sugar level. Agave nectar has a GI of 30 and thus increases your blood sugar level slower than glucose (GI 100) and sucrose (GI 65).

LIFEAID to the rescue

My friend and workout buddy Felipe recently introduced me to the LIFEAID Beverage Company during an intensive rowing session, which ended with me lying exhausted on the floor in his basement. When he saw the misery I was in, he gave me a choice between a spoon of honey or a can of FITAID, LIFEAID’s recovery drink. I tried the latter and quickly felt better – thanks to the 9 grams of sugar and other ingredients that helped raise my evidently low blood sugar levels.

After I had recovered, I took a closer look at the ingredients of LIFEAID, which included:

LIFEAID is not a traditional sports drink

As we have learned above, your body needs glucose during intense exercise. LIFEAID doesn’t offer any drinks that contain more than 9 grams of sugar. That’s less than half the amount of sugar in traditional sports drinks. As a result, LIFEAID doesn’t market its products like sports drinks. Instead, LIFEAID offers drinks to supplement your lifestyle in a natural, and Paleo-friendly way through the following products: 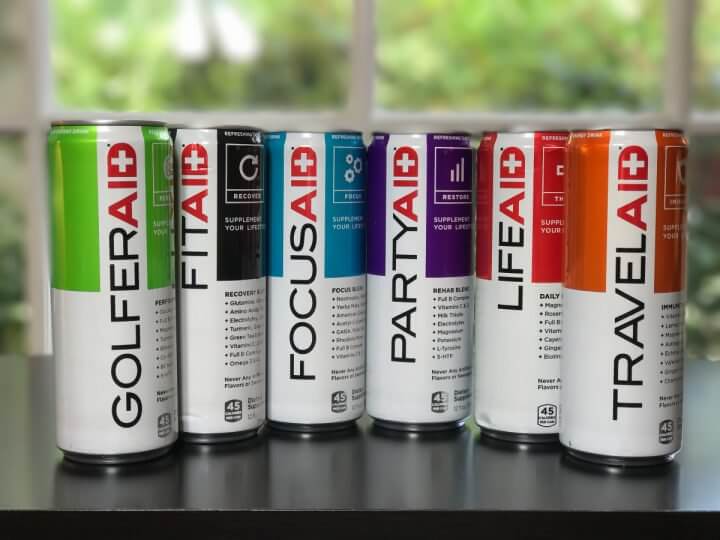 I recently reached out to LIFEAID and asked them to send me some of their products for review. Thankfully, they did! During a recent 5k run, I tried their FITAID fuel protein blend and GOLFERAID before the race and FITAID right after, to recover. My goal was to finish the race in 27 minutes or less, and I came in at 24:31. So I have no complaints.

Me enjoying GOLFERAID before a 5K race

WHY I PREFER LIFEAID OVER TRTADITIONAL SPORTS DRINKS

Sugar is poison, and I try to stay as far away from it as possible. Sugar in liquid form is even worse because it raises your blood sugar level even quicker than other carbohydrates in solid form. However, during intensive exercise or activity, your body needs quick access to glucose (sugar). So sports drinks certainly have their place. But I am not a professional athlete, and I don’t earn a living based on my performance when I push the jogging stroller around the neighborhood. There are times when I empty the glycogen reserves of my body, but that doesn’t happen every time I exercise.

The American Heart Association (AHA) recommends not to have more than 36 grams of added sugar per day for men and 25 grams for women. In reality, you don’t need and shouldn’t eat any added sugar. But I guess the AHA had to come up with a limit that was realistic for the poor diet of the average American.

Gatorade has 21 grams of added sugar, which is 58% of the maximum the AHA recommends for men and a whopping 84% for women. If I had a bottle of Gatorade every time I exercised, I would most likely ingest more added sugar than necessary. That, in turn, would have severe consequences on my health in the long run.

That is why I prefer to err on the side of caution and stick with LIFEAID products for exercise. Each drink has only 9 grams of sugar and no artificial ingredients. Beyond exercising, my liquid diet consists of water, coffee, and a glass of wine for dinner. Recently, I started experimenting with Kombucha and Kefir, and I enjoy the occasional Mojito or Margarita. But I am extremely careful not to introduce liquid sugar into my daily routine, and I recommend you do the same.